12 Wonky Cat Behaviors and the Curious Reasons Behind Them

Cats are in a league of their own when it comes to unpredictability. Some kitties love to snuggle while others you are sure will murder you in your sleep. They are nothing if not unique in their personalities. When it comes to behaviors, though, they do have, ahem, dare we say wonky habits that they tend to share in common. If you’ve got a cat, you’ll surely recognize some of these purrrrfectly normal idiosyncrasies. If you don’t have a cat, well, you could be in a for a wild ride. Below, we explore 12 wonky cat behaviors and what those of us in the veterinary community think are behind them. 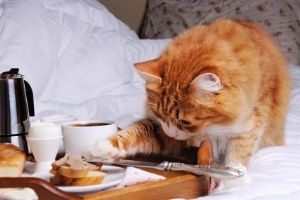 That family heirloom that was in your family for generations? Boom, gone. That new vase you got to display your weekly supply of fresh flowers? History. Does your cat simply hate your smug, fragile item-owning guts? Not necessarily. Most cat behaviorists agree that this is a combination of cats embracing their prey instincts and also trying to get your attention. To discourage this cat behavior, ignore it. Even better, put those family heirlooms out of Kitty’s reach.

You know how little boys pull the hair of girls they actually like when in elementary school? This is essentially the cat version of head boops. They bonk you in the head with their own head (the technical term is “bunting”) because they love you. They’re also saying “hands-off” to others and marking you for their own, as they have pheromones in their cheek areas. Cue the music for Fatal Attraction. Going along with bunting is “allorubbing”, or the way cats rub up against humans, other cats, and sometimes even, gasp, dogs they love. Again, this behavior is their way of claiming you as their own. 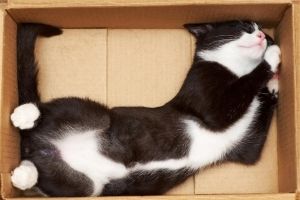 Put out a tiny box and count the nanoseconds until your cat is sleeping their day inside the box, and the smaller the better. Why? No one knows for sure but it’s likely partly simply because they can, although some posit that it is also to preserve body heat. The metabolic rate of kitties drops as they sleep, which is why you’ll often find them napping in warms places such as in front of sun-soaked windows, hot garages, and even laptops (although sometimes they lay on the latter for attention!). Others think that this behavior harkens back to the days when cats weren’t domesticated and had to hide themselves away from predators.

While the other wonky behaviors we’ve mentioned thus far are more benign, this is one you need to be careful about. Cats will sometimes chew on strange things - such as rubber bands, plastic bags, blankets, and socks - due to anxiety, boredom, or illness. Plastic bags are probably the most common of these items, as cats seem to enjoy the taste of plastic as well as the texture when they are teething. Seek help from your veterinarian about this one, as your cat might be indicating disease and this behavior can also cause choking and/or intestinal blockages.

Another strange eating-related habit you might see is cats eating plants, grass, or other greenery. While cats are generally carnivores, they would have normally gotten this kind of food in the bellies of their prey. They sometimes nibble on plants when their tummies are upset. It’s not considered problematic, although you should consult the ASPCA’s list of plants that are toxic to cats. Also, if they knock a plant over (see wonky behavior #1!), clean the mess up right away, as there can be parasite eggs in the soil. 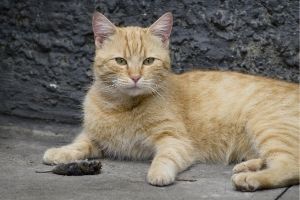 Do you know that face you made when you open Aunt Gilda’s homemade sweater she knitted for you during the holidays? That will come in handy when your cat leaves you the “gift” of a dead bird or mouse. Gross? Yes. But is this love? Also, yes. Most veterinarians recommend you keep cats indoors in keeping with the ASPCA’s recommendations. It not only cuts down on gift-giving, but it will also help your cat to live a longer life free of parasites and other diseases.

Of course, if a bird or mouse makes their way into your home, your cat can’t be held accountable for prey instincts. In fact, you should never scold your cat for this. Conversely, avoid praising them for their thoughtfulness if you want your outdoor cat to stop this thoughtful behavior.

Most of us are more familiar with front paw-kneading, which can be a nod to the kitten days when this was done to stimulate Mama’s milk flow. It’s also generally seen as a show of positive emotion and affection, too, which is great unless it’s done on your bare skin. Yow! If Kitty likes to do this, be sure to keep their nails trimmed. Lastly, kneading is another way a cat marks its territory with its scent. Possessive much? Kneading done by the back paws is done either before and after mating or just before they're about to do a post-catnip cat zoomie. 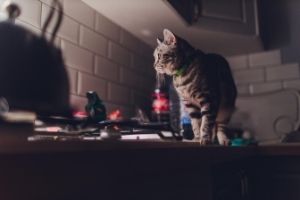 This is one of behavior that’s not just wonky but it can be downright disruptive to the family. It harkens back to the days of nighttime hunting done by cat ancestors. To discourage this, make sure you provide plenty of daytime stimulation by rotating highly interactive toys. If it still continues, you might try giving your kitty a small meal at night to make them sleepy. If these PM parties are accompanied by loud vocal sounds, take your cat to your veterinarian to rule out a physical issue.

Your litterbox should have the following attributes:

If you’ve ensured all of the above but your cat is still going outside the litterbox, consult your veterinarian. Your cat might have a urinary tract infection or other illness that’s causing this behavior. It’s also worth mentioning that if your cat was formerly burying their excrement but is now leaving it out for all the world to admire, they might be claiming their territory in the case of a new pet or other in the home. 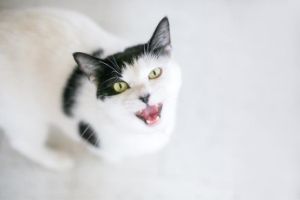 Meowwwww! How basic. Don’t box your cat in as a one-trick pony, as they are likely to make many more sounds than just this stereotypical cat noise. When watching birds or other animals in your yard, you’re bound to hear chattering, yowling, chirping, and even hacking.

Has your cat ever raised their tail and presented their butt to you? What a compliment! Your cat is telling that you that they feel safe, secure, and happy, and they’re essentially offering you the opportunity to take a good sniff. Don’t worry—Kitty won’t be offended if you don’t take them up on this gracious offer. 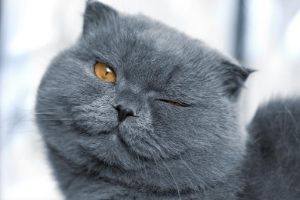 Winky wink! Much like the butt presentation, this is a huge compliment. We’ve never heard of a butt presentation/wink combo but, my gosh, if this has happened to you, just consider yourself King or Queen of Cat Affection. A slow cat-eye blink is often called a “cat kiss” and, if you initiate it, you just might get your furry feline to return the blink. Rawr!

Remember when your brother would pretend he was done with his Milky Way bar on the road trip to Florida, only to taunt you with the one bite he saved that he brings out later? Cats will sometimes hide, or cache, their food due to the instincts that tell them to hide the food from other cats or kittens. They will also occasionally scratch around the bowl and/or find shredded paper in your home to cover their food!

Cats, man. They are interesting creatures to be sure. If you’ve noticed any of these wonky cat behaviors, you’re in good company. As always, though, trust your gut—if something doesn’t seem right about your cat’s behavior, make sure to contact your veterinarian.